We’d like to share a quick foto-tour of Mexico, where photographer Arturo Ortiz matches the images on our currency to the actual locations … paired with Yucalandia’s thumbnail descriptions of the places & people.

¡ Mil Gracias !  to Arturo for his fun fun fotos https://www.facebook.com/arturotrip/

As you tour Mexico (below) through her leaders & important sites,  consider remembering some of the details … if you ever want to become a naturalized Mexican citizen, as SRE officials often ask us to describe those same key details of our bills during the oral exam.
😉
.

The front of the $10 peso note depicts Emiliano Zapata Salazar , a leading figure in the Mexican Revolution.  Zapata is further remembered as the main leader of the peasant revolution in the state of Morelos, and the inspiration of the agrarian movement called Zapatismo.

Monte Albán  is known as one of Mesoamerica’s most important archeological sites as the Zapotecan & Mixtec capital from  800 B.C. ~ featuring over 170 tombs, great plazas, ball courts & temples.

The much beloved President Benito Juarez is on the front.
“Among individuals, as among nations, Respect of other people’s rights … is peace. ”

.
$50 Pesos:  ACUEDUCTO DE MORELIA
The Aqueduct of Morelia is one of the best conserved major early constructions of the Virrey ~ Vice Royalty ~ Spanish Colonial period of Mexico.

The front of the$50 peso note features the face of José María Morelos , wearing a large headband and a pirate-esque left side earring … even though he was a priest and influential force in the 1810 Mexican War of Independence

Note: The image above is an artist’s rendition of all the buildings in their original states before the Conquistadores & Church tore them down to as materials to build government offices & churches.

Here’s an image of today’s remaining Aztec runs in the center of Mexico City:
. 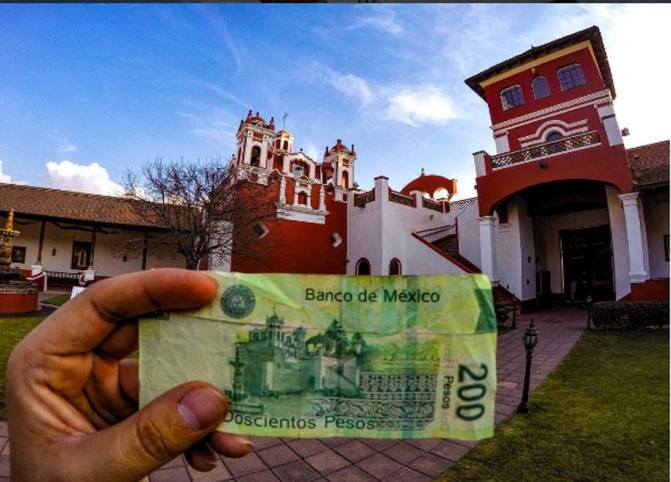 This foto is by Niveck Britto

The Hacienda Panoaya is considered one of the most beautiful in Mexico. 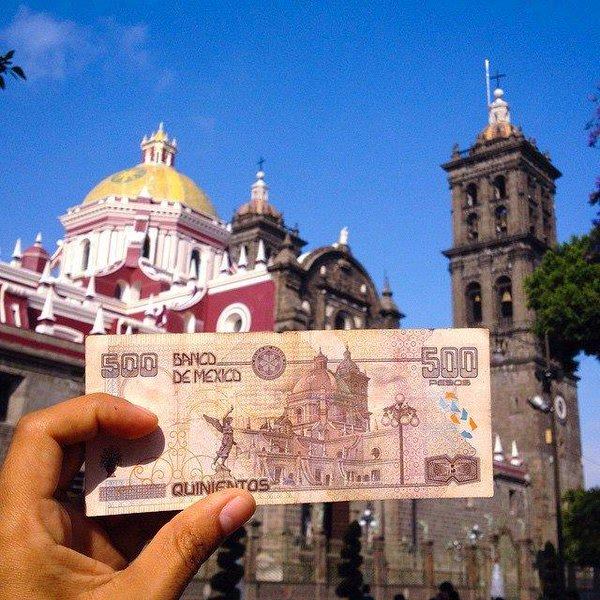 Formally know as  “Heróica Puebla de Zaragoz”
(For the purpose of theme of Mexican historical sites on our currency, we’re showing the old series $500 peso note.**)

This old series $500 peso note has the face of General Ignacio Zaragoza,  hero of the Battle of Puebla.

**The new current currency $500 peso note has a Beauty & the Beast theme, featuring artists & national treasures Diego Rivera (El Sapo – the Toad)  and uni-browed Frida Kahlo .  Some of us find it ironic that Mexico’s modestly large denomination and most counterfeited bill (capitalism at it’s height) features 2 of Mexico’s most noted Communists. 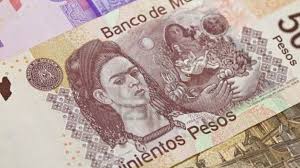 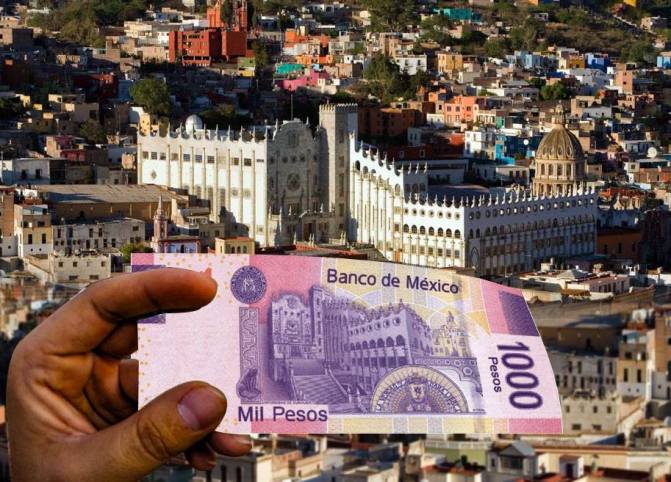 The $1000 peso note is our largest denomination in common circulation. honoring  la Universidad de Guanajuato,  dating from the 18’th century as the hospice of the Holy Trinity 1732  … (yes,  another Trinity College) …

The front  of the $1000 peso note features Don Miguel Hidalgo y Costilla,   the  chispa~spark of the 1810 Revolution … Known for a call to Independence …  El Grito    or  Grito de Dolores

And thus ends our little lesson on the currency, history & some key geographic sites of Mexico.