This article is a reply to some questions asked about the impacts of leaking deep water oil wells.

Here are the questions:
“. . .I am curious about about oil drilling off Mexico’s coast.   Would that be Pemex who is responsible for those sites or does Mexico have foreign operators for those?   Ultimately, who would be at fault in the event Mexico experiences such a disaster?”

In response, we offer some points on Current, Past & Future Issues with Oil Production in Mexico.  The information presented exceeds what is needed to answer the questions, because we’re interested in kicking around the ball with folks with discussions on: the future of the Mexican economy & the future of the Peso – and these topics hinge heavily on Mexican oil production.

OP: “Would that be Pemex who is responsible for those sites or does Mexico have foreign operators for those?”

Current Status of Mexican Oil Production Law:
Under Mexican law, only PEMEX can carry out the following activities*:

Caveat: PEMEX is permitted to contract the services of private firms via public works or services contracts, “in order to better conduct these activities”.

* Most Mexican oil and gas activities are considered to be part of the “Mexican Oil Industry” and can only be carried out through PEMEX and its subsidiaries.

Private entities may only engage in oil and gas-related activities that are not considered to be part of the Mexican oil industry, such as:

For more details on the legal bases of oil related issues see: http://www.latinlawyer.com/…ticle/26916/oil-gas/

The Present Disaster:
OP: “Ultimately, who would be at fault in the event Mexico experiences such a disaster?” 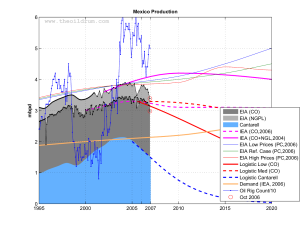 “Ultimately, who would be at fault in the event Mexico experiences such a disaster?”

The Future of Mexican Oil Production:
The information presented above seems to indicate that the Mexican Gob. needs to act now – to pass legislation or amend their Constitution to allow foreign deep water oil drilling companies to come into Mexican waters to drill.

My personal thoughts on these matters: