Yucatan has very hard water both from private wells and in public water supplies. This hard water ultimately always leads to a steady build-up of scale / Calcium carbonate / CaCO3 (sarro) on the flapper valve in the bottom of flush toilet tanks (this valve is called a sapo = toad in Mexico – also called a toilet flush valve in the States.) 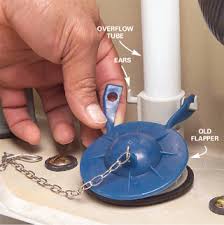 Your Toad / Tu Sapo
If your home has a hydropneumatico (water pressure pump and ballast tank), then the slowly leaking toilet(s) can cause the hydropneumatico to cycle “ON” every 20 minutes – every hour, when no water is being used in the house = 1 of 4 common reasons that Tropical bombas (pumps) run unnecessarily (a topic for several other posts).

So,  if you fix the leaking toilet tank valves,  then your pump should not run for hours when no water is being used.

Ways to Test Your Toad:
The simplest ways to check if your toads are doing their jobs are:
1. Look for a little water streaming into each toilet bowl = a slight disturbance of the water’s surface.
If the surface of the water is moving a little, determine if it is being disturbed by a slight trickle down the side of the bowl.
2. Look for steaks of iron stains or hard water (scale / sarro) on the bowl. or
3. The Best Test: open the toilet tank and add a few drops of blue food coloring to the toilet tank – and come back in ½-hour to see if there is any blue water in your bowl.

If the water level in the tank is 1-2 inches below the overflow tube, then you probably need to clean the rubber flapper valve (sapo / Toilet Flush Valve) and it’s seat.

Cleaning &/or Replacing Your Sapo / Toilet Flush Valve:
Most sapos are attached by 2 arms to 2 pegs on the toilet overflow tube.
Shut off the water inlet valve to the toilet (do this gently, because corrosion in the Tropics tends to make them fragile).

Gently remove the sapo’s arms off the pegs and raise the sapo out of the tank.
If you have a heavy accumulation of powdered sarro (white scale) in the tank bottom, first swirl it around, before opening the sapo, to get it to flow out when you open the sapo and drain the tank.

With the sapo out of the tank, gently scrape any scale off the sapo – paying special attention to the sapo’s bottom  – where it contacts the seat of the toilet valve.   After cleaning your sapo, there should be a smooth rubber surface on the bottom where it contacts the valve seat.  If your sapo’s bottom is rough, worm or cracked-  it’s time to head off to your local  Tlapaleria (small hardware store).   They typically carry Universal Sapos (never imagined you had a universal toad, did you  –  wonder what other planets it has  traveled-to –  which leads to speculation on what past-life  your Univeral Sapo has had??? but that’s a whole other post, including the sapo’s little alien friends ).

Anyway,  if the sapo is in good shape, it’s time to clean the saro off of the valve seat.
Since modern valve seats are made of plastic, you need to use a plastic tool or plastic scraper to scrape-off the accumulated saro off your seat.   The surface of the valve seat should be as smooth as a baby’s bottom  where it touches your sapo, to get a good seal.   After gently scraping the seat’s surface,  if it is still even a little rough (test with your finger),  then get some really fine grit sand paper  (#320 or single 0 or double 0  = double ought/nought – preferably the water-proof stuff =  lija fina  o lija muy fina in Spanish) –  it’s typically black)  and gently and evenly polish the seat – do NOT make any little dips or distortions in the seat face or you will have leaks – and a big job removing the tank to replace the whole valve assembly).

Once your  sapo and seat are clean and smooth,  then apply a very very thin layer silicone grease to the mating parts  (the parts where your sapo sits on your valve seat).  Better still:  apply a little wax from a toilet gasket to help both parts seal well, and to inhibit future sarro deposition.  (some people use Vaseline, but vaseline does not stand-up well over time, and damages some rubbers).   (mating parts,  rubbers,  your toad, . . . never thought plumbing could be a hot job. . . .  we’re in the Tropics now, baby,  everything’s hot. . . especially if the missus is in her 50’s . . .  maybe time to clean up this discussion, to keep the perverts from searching and reading this stuff?) (plus I just noticed that Nuestra Señora is blushing, and can it ever be good to make the Virgen blush?)

Re-install your sapo and make sure it flaps /swings up and down smoothly.   Check it’s operation by flipping the toilet handle.   The handle should smoothly lift the sapo and let it fall firmly back into place, with a little bit of slack in the chain/string/rubber-tether to allow the sapo to close fully.  The lever arm attached to your sapo should be roughly jorizontal if the tether-length is set right.  If the lever arm is going above horizontal,  then check if it strikes the underside of the lid = bad – and shorten the tether (slip the links/string. tether  through the holes in the arm to shorten its throw – but don’t shorten it too much, because you want the tether to go a little slack when you let go of the toilet handle – allowing the sapo to fully close & seal).

Final thought:  lots of guys here swear that the sarro powder/scale  in the bottom of the toilet tank is the problem,  but they’re wrong.   There is an air gap in the toilet underneath the sapo, and the water on the wet sapo evaporates into this air gap – causing precipitation of calcium carbonate hardness (sarro) onto the underside of the sapo.  Because there is always a little water penetrating through the sapo-seat seal, this water evaporates and encrusts both the sapo and valve seat with scale – having nothing to do with the powdery scale that accumulates in the tank bottom…

This evaporation is why treating the sapo and seat with a little toilet gasket wax or silicone grease   helps keep the sapo and seat dry and sarro-free – (no sorrows – no worries – be happy)  –  which also keeps your bomba from running unnecessarily….